Homer Simpson is a character in the TV show Police Cops. He shares his name with Homer.

"And that's the end of that chapter."
―Homer Simpson in the pilot episode[src]

Homer Simpson started as a very cool and good-looking police officer who, along with his partner Lance Kaufman, were known as the "Police Cops". His catchphrase was "And that's the end of that chapter," and he flicked a scarf around his neck whenever he said it. He also owned a palace in Europe—all of this was only in the pilot episode of the series.

With the second episode, the character had been rehashed into a "bumbling sidekick," who was very accident-prone and had a new catchphrase, "Uh-oh, spaghetti-o's!" 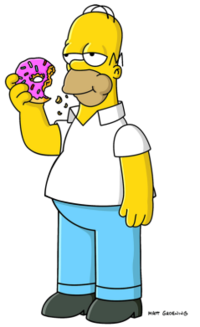 Originally, the real Homer started getting praise from his friends and other Springfield citizens, because of the connotation associated with sharing his name with a cool TV character (the original Police Cop). But after the second episode, Homer became a laughing stock. He grew increasingly annoyed and eventually had his name legally changed to "Max Power" (which he got off a hair dryer).

The recurring gag of the Homer Simpson character unintentionally walking into cacti was lifted from the real Homer, who went to see the executives of FOX when the character had been turned into a buffoon. On his exit from the boardroom, Homer walked into a cactus plant. His plea, "Please, I'm a human being. Let me have my dignity back!" was also written into an episode, said by the character before falling off a lamppost onto a cactus.[1]

The Homer Simpson character was based on comedian Chris Farley, who made a career of playing bumbling idiots, particularly on Saturday Night Live.