Robby the Automaton is a robot who advertises the Springfield Knowledgeum.

Robby was brought to Springfield Elementary School to advertise the Knowledgeum to the students. Robby then asks the students if they've wondered what it's like to touch a star or which of The Three Stooges brains weighed the heaviest. Bart then noticed its controller outside the window, in a tree, and threw an apple at him, causing him to fall out and the command link to Robby to be severed. Robby then went into its default setting, "crush, kill, destroy" and attempted to strangle Principal Skinner. When Skinner asked the kids to help, they cheered instead.[1] 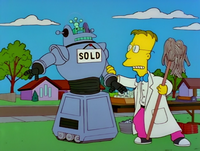 Robby as "Floyd the Scrubbing Robot"

He is shown as a "scrubbing robot" and Professor Frink calls him "Floyd", this time with a mouth and a green antenna instead of red, but the body is the exact depiction of Robby.[2]

Two Robby the Automatons were seen at Professor Frink's lab when Lisa told Frink that he had won a Nobel Prize.[3]

This section is transcluded from The Simpsons: Tapped Out decorations/Robots. To edit it, please edit the transcluded page.

Robby seems to be a parody of Robby the Robot from Forbidden Planet.