The Grumple is a green, hairy monster. 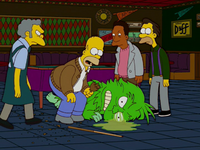 "What the hell is this thing?!"

He played a character that threatened to steal all of the Holiday cheer of the Winter Holidays in the Krusty's Kristmas on Ice show. When a fight broke out between the basketball team and the show skaters (because the preparations for the upcoming game were ruining the show) Homer took matters to his own hands and fought the Grumple, demanding him to return the Holiday cheer. On Christmas Day, when Gil had all of his stuff stacked in the living room of the Simpsons House, Homer commented that this was a problem. Marge then commented that Homer had a bigger problem outside and pointed at the window. The Grumple was standing outside the house, holding a knife and proclaiming "Grumpily Grumpily Groo! Your blood will make my stew!" Homer suspected it was the same Grumple from the Ice Show. Sometime later in the year, while Gil was still mooching off of the Simpsons, Homer was at Moe's Tavern and the Grumple attempted to attack again with a broken pool stick. Homer hit him with a beer bottle, knocking him unconscious and some sort of green liquid began oozing out of the Grumple's eye, suggesting that it was not a human in a costume, but some sort of strange creature.

The Grumple didn't return until the following Christmas when the Simpson Family spends it at their condo in Scottsdale, Arizona with Gil, having brought his wife, son and daughter with him. The Grumple proclaims "Grumpily Grumpily Groo! We would like to spend Christmas with you!" having put his feud with Homer aside as the humans and Grumples began singing Christmas Carols.[1]

He later appeared in Hot to Trotsky's Ice-Skating Rink with a lot of other ice skaters. He was then shot in the eye by a flaming T-Shirt fired by Wayne Slater when telling everyone to get out.[2]

He was later seen among the people who went to see Lady Gaga when she came to Springfield. He had a sign that said "Grumple, Grumple Groo, Sometimes I feel sad too!".[3] He was later seen in the Simpsons' back garden with a banner saying "Other" over his head, saying that he belongs to a non-Jewish, non-Christian religion.[4]

He appeared in the game Frosty the Hit Man where he was killed by Frosty.[5]

He also was seen in the Towne Centre at Springfielde Glenne's Christmas party.[6] He was also seen in an hallucination that Homer had.[7]

The Grumple is also a part of the bowling team Are They Reals.[8]

He appeared in the special couch gag called the Homer Shake.

This section is transcluded from The Simpsons: Tapped Out characters/Holiday 2013. To edit it, please edit the transcluded page.

The Grumple is an obvious parody of The Grinch.