"Number One" is the head of the Stonecutters. Not much is known about Number One, except that he is a loyal Stonecutter and rose above the ranks to lead the Springfield chapter. He gleefully subjects new recruits to tortures such as "the crossing of the desert", "the unblinking eye" and "the paddling of the swollen ass... with paddles". He also enjoys presiding over the club's many social gatherings, which include things like ping-pong, ribs, and drinking.

Number One oversaw Homer's initiation into the Stonecutters, but then expelled him for desecrating the club's sacred parchment (by using it as a napkin and blowing his nose on it). When Homer was later discovered to be the prophesied "Chosen One" of the Stonecutters, Number One quickly conducted the appropriate ceremonies for Homer's new status. However, Homer made changes which made the club no longer any fun for the other members. Number One then disbanded the Stonecutters and started a new club called "The Ancient Mystic Society of No Homers".

He is security guard at Stark Trek Museum.[1] 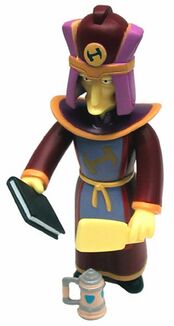