Ludwig van Beethoven was a composer in the 18th century. 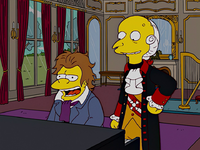 Beethoven appeared in a story told by Marge. After Wolfgang Amadeus Mozart died, Sally Salieri went to visit Emperor Joseph II as she considered herself the greatest composer alive. However, she was told to wait as the Emperor was in with Ludwig van Beethoven at the time.[1]

When Bart Simpson was playing piano, the ghosts of Mozart and Beethoven appeared.[2]

A bust of Beethoven was thrown at Professor Frink.[3]

Beethoven and Tupac Shakur took part in an "Ultimate Def Jam" contest with each other in Heaven.[4]