Barnard "Barney" Gumble, once written as Barney Gumbel,[2] (born April 20)[3] is the Springfield town drunk, the most prominent of several alcoholic Springfielders and Homer Simpson's best friend. He is also friends with Carl, Lenny, and Moe.

As a teenager, Barney showed much potential. He was Harvard-bound until Homer introduced him to beer on the night before they had to take the SATs. He took to drinking after his high-school sweetheart Chloe Talbot left Springfield to become a successful TV reporter. He used to have blond hair, but later dyed it brown.[5]

Later on, with Homer, he was a member of The Be Sharps barbershop quartet, in which his stellar Irish singing voice was discovered. Barney showed his artistic side again when he won top prize at the Springfield Film Festival for his moving documentary about his life as an alcoholic, unfortunately titled "Puke-a-hontas".[1]

Mr. Black also hired Barney to act like Krusty the Clown for the campers at Kamp Krusty saying that Krusty has larangytis and a bad back(meaning he won't be saying or doing anything), although Bart was not fooled by his attempt at defaming Krusty (as Barney was poorly disguised as Krusty), and also ends up confirming Bart and the rest of the campers suspicions of Black just "slapped a clown suit on some wine-o" by answering that he is "Krunchy the Clown," as well as declaring for Krusty's return (or as he calls him, "Krunchy")[6]

Barney was inspired by Homer's Mr. Plow business to have his own snow removal service, calling himself the Plow King and buying a snow removal truck much bigger than Homer's. He even got Linda Ronstadt to sing on his commercials. "We've been looking for a project to do together for a while," he explained. He took away all Homer's customers and earned the key to Springfield (which was taken away from Homer). Homer eventually fools Barney into traveling to "Forbidding Widows' Peak" to plow through the snow for a $10,000 bill, but is caught in an avalanche. Homer ends up saving Barney, they become friends again and team up, only to find the snow melting (after Homer comments "When two best friends team up, not even God himself can stop them." To which a voice from the sky replies "Oh, no?" and promptly beams down a ray of light to melt the snow), and Homer's truck repossessed.[7] Barney is seen driving his plow as the Plow King again in several occasions.[8][9]

When Mr. Burns caused Moe's Tavern to close down and was shot later, Barney became a major suspect for shooting Burns after Burns blocked the sun (despite his easygoing nature, Barney apparently carries around a derringer at all times).[10][11]

Barney served in the United States Navy Reserve for a short time, as a submariner on the USS Jebediah with his own mother as his superior officer, although he briefly served in the U.S. Army during his youth.[4]

Before Barney started drinking, he was a very intelligent young man, but while studying for the S.A.T.s Homer offered one of Abe's beers. After giving into Homer, Barney took his first sip and quickly downed the entire can. His clothes and hair quickly began a mess and he ran out of Homer's house.

Barney is almost always seen in Moe's Tavern, where he is a regular. His desperation for alcohol has been the source of many jokes. He has a quavering, slightly broken voice and a distinctive loud belch (although he sings completely differently, having a beautiful "Irish tenor" type voice), as well as a characteristic wandering eye. He remains friendly and good-natured despite his unfortunate condition. Heavyset, slovenly, and unmarried (though occasionally seen with women), he lives in a very untidy and sparsely-furnished apartment. It has also been implied that he has "lived" in Moe's Tavern. Barney drinks so compulsively that Moe had to send his beer tab to NASA for it to be calculated: it ultimately came out as fourteen billion dollars worth of beer (Although Moe mistakenly stated it was seventy billion dollars until he realized that that was actually the cost of the Voyager Spacecraft),[12] and has contributed to at least one of his fellow barflies' beer tab (such as when Homer went to Japan).[13]

He is occasionally seen doing some sort of manual labor, such as working for his Uncle Al at Barney's Bowlarama, but has also been the owner of a successful snowplowing business and been employed by NASA as an astronaut. Barney states that he is 43 years old and his first name was revealed to be Bernard, although he also appears to be in the same high school class as Homer in flashbacks.[1] When streaking at his high school prom earned him "about a decade's worth of detention", it was hinted that he was either to be held back a year, or had already repeated. He had also ended up having to do court-issued community service with picking up roadside litter where he attacked Principal Skinner [who was trying to cross the interstate with a tank of gasoline for his car at the time] after hallucinating that Skinner was a giant beer can.[14]

Barney has survived experiences such as exploding zeppelins,[15] malfunctioning Jet packs,[16] and being crushed by a falling table.[17]

Barney also apparently takes pictures of Legs' sister. As stated in "Homie the Clown" when Homer states he is "Barney Gumble" after the mob picks him up thinking he is Krusty.

When alcohol is not readily available, Barney is seen drinking just about anything, such as turpentine, varnish, rubbing alcohol, and brake fluid. Barney is also Homer's best friend. Barney is also friends with Moe, Lenny and Carl. Sadly he also has a tab of 14 billion dollars owed to Moe.

Barney was once forced to remain sober for the drinking night at Moe's when he received the position of Designated Driver that night (Coincidentally on the same night that he was to get free beer from Duffman as a reward.). As revenge, he decided to drive Homer's car to New York City and leave it there.[18]

Barney once attempted to kick his alcoholism habit. For his birthday, Moe gave him a gift certificate for helicopter flying lessons, not expecting Barney to actually use them. "Can you imagine this tanked-up loser at the wheel of a whirlybird?", Moe asked. This comment, coupled with a humiliating videotape of Barney's actions while inebriated, gave Barney the drive he needed. Barney attended Alcoholics Anonymous meetings, became sober, and took the helicopter lessons. He became fairly proficient at it, though he admitted he had not yet mastered right turns. This new skill helped Homer rescue Bart and Lisa from a forest fire. Unwilling to lose one of his most crucial customers to his tavern, Moe made his own coffees, laced with Beer to re-addict Barney and get him back into the bar.[19]

Barney once made a movie about his struggle with alcoholism and submitted it to the Springfield Film Festival. When he won the grand prize, he vowed to remain clean and sober from that point forward, but quickly backed off his vow when it was announced that the grand prize was a lifetime supply of Duff Beer.[1]

Homer encouraged Barney to drink a beer when he played Ulysses S. Grant in a re-enactment of the Battle of Springfield (though this, surprisingly, did not cause him to become alcoholic again, even surprising Barney, who was hesitant to drink a beer, even for the role, as he was a recovering alcoholic.). He briefly sobered up and got back behind the controls of his helicopter to rescue his old girlfriend Chloe from a volcanic lava flow. He was also relatively sober and piloting his helicopter again when helping Homer take celebrity photographs.[20] When he suggested that an indicted Marge go to a particular rehab clinic to help her kick her drinking habit, he stated that the clinic had "cured him six times," implying that he has been switching between a current and recovering alcoholic.[21] It's revealed that he's always sober in the morning until he enters Moe's Tavern.[22]

During Trappuccino, he was one of the barflies who run into the church, and even later, Barney was attending an Alcoholics' Anonymous meeting and went crazy when the coffee ran out.[23]

In The Simpsons Wrestling, Barney is a playable character and attacks by using a glass of beer and creating burp clouds.

In The Simpsons Road Rage, Barney is a playable character and drives the Plow King. In the mission "Barney's Rage" he runs over several Capital City Goofballs. When not played, he frequently appears as a passenger.

Barney can be seen in various places in The Simpsons Skateboarding.

In The Simpsons: Hit & Run, Barney returns a cooler that Homer gave him, as it was originally stolen from Flanders, and later sells Homer the Plow King. He also appears working at Krustylu Studios.

In The Simpsons Game, Barney first appears as one of the contestants in the Duff Ultimate Eating Challenge in the level Around the World in 80 Bites. He also appears in Mob Rules as one of the people Marge can use to protest the sales of the Grand Theft Scratchy video game to minors.

This section is transcluded from The Simpsons: Tapped Out characters/Barflies. To edit it, please edit the transcluded page. 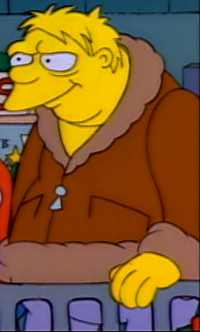 Barney was partly based on "Crazy" Guggenheim, a character from Jackie Gleason's American Scene Magazine.[24] Matt Groening noted: "Barney was taking the standard sitcom sidekick and just making him as pathetic as possible. And also there was a sort of unspoken rule about not having drinking on television as a source of comedy. So, of course, we went right for it."[24] In "Days of Wine and D'oh'ses", Barney was sobered up, a move that many staff members were against believing "a wide-awake, freshly showered, sober Barney just isn't as funny as an unkempt, disoriented, drunk one." Castellaneta did not change his voice after the sobering, because "[he thinks Barney's] still got 15 years of booze left in his veins."[24]

The name Barney Gumble is a parody (and near homonym) of Barney Rubble, Fred Flintstone's best friend on Hanna-Barbera's The Flintstones. In several of the episodes of the first season, Barney Gumble's hair was yellow, just like Barney Rubble's hair. He was also born on April 20, 1956.

Barney first appeared in the episode "Simpsons Roasting on an Open Fire", in which he worked as a department store Santa and gave Homer a tip for winning at the dog track. The Season 1 DVD indicates that the script writers originally intended for Barney to be Homer's next-door neighbor.

Barney is also a major character on the show and has been central in a few episodes such as "Mr. Plow", "Homer's Barbershop Quartet", and "Days of Wine and D'oh'ses". Barney has also appeared in every single season; although in Season 19, he made only cameo appearances. In Season 2, 3, 4, 5, Barney made lots of speaking appearances for approximately 10-15 episodes, because he was always seen in Moe's. He has appeared in 274 episodes.