Everyman (Avery Mann) is a superhero created by Comic Book Guy. Homer Simpson portrays him in the film adaptation.

Whilst in The Android's Dungeon, Bart and Milhouse discovered a comic book written by Comic Book Guy, Everyman. They enjoyed the comic, which surprised Comic Book Guy. Comic Book Guy then decided to get self-published. The comic series became a huge hit with many people in Springfield reading it. The comic then got the attention of two film companies; One-Week Wonder Films and Ginormous Pictures. Ginormous Pictures got the rights to make a film based on Everyman when they let Comic Book Guy decide who would play the titular character.

Comic Book Guy was disappointed by every actor who auditioned, until Homer walked into his shop. Comic Book Guy realized that Homer would be perfect for the role and signed Homer onto the film. However, the producers decided to meddle with Comic Book Guy's view of the character and decided that Homer needed to be more fit. They hired Lyle McCarthy as a personal trainer to get Homer into shape. Midway through the film, Lyle McCarthy left Homer for another celebrity. This led to Homer putting on weight again. The final film had Everyman's physique changing frequently between scenes due to the change in Homer's weight and the film was a flop.[1] 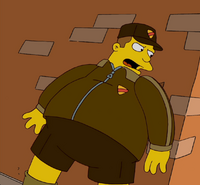 Everyman's real identity is a mail carrier called Avery Mann. Avery Mann is out of shape and is seemingly an ordinary person with a boring job.

His powers allow him to absorb the powers of any superhero by touching their comic book. For example, he got an Iron Man suit by touching an issue of The Invincible Iron Man and got Plastic Man's powers by touching an issue of Plastic Man. He also has the ability to absorb more than just a superhero's powers as he absorbed the patriotism of Captain America and the boobs of Wonder Woman from their comics. At one point, he also took on Batman's powers and had a Batmobile.[1]

In one issue of the comic, Avery Mann was delivering a package to a bank when he realized that it was being robbed. He ran off, dropping the package, and changed into Everyman to take the robbers on. He absorbed the powers of Iron Man and flew back to the bank, defeating one of the robbers. The other robber tried to escape so Everyman absorbed the powers of Plastic Man. He then stretched out his foot and captured the robber in a cage made out of himself.

In issue #289 of the comics, Everyman teamed up with Marmaduke. However, Marmaduke died.[1]

In the film, Everyman saved the president's life using an issue of Captain America and an issue of Wonder Woman to gain the patriotism to want to save the president and the boobs to distract the guards respectively. Another scene of the film saw Everyman being attacked by helicopters on a rooftop.

The main villain of the film was Dr. Reptilicus. He was searching for Everyman whilst in a walking robot. Everyman then body slammed him.[1]

This section is transcluded from The Simpsons: Tapped Out characters/Vigilantes. To edit it, please edit the transcluded page.