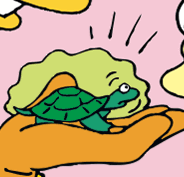 Glowy as a turtle

Radioactive Man has a picture of Radioactive Dog in The Containment Dome.[3]

The Substitute Earth version of Glowy is owned by Radioactive Boy. When a young Claude Kane III was trying to save Glowy, they both got caught in an atomic explosion. Glowy joined the team in going the Betaverse to try and find the cause of the dimensional rifts. Whilst there, the heroes fought against Nega-Pneumatica. When Glowy noticed a man in a booth operating Nega-Pneumatica, he chased after him and ripped his pants. The heroes then knocked off Nega-Pneumatica's head which crushed Glowy, killing him. Radioactive Man then consoled Radioactive Boy over Glowy's death, saying it was the villain's fault and that some power greater than them would bring Glowy back before long.[4]