Julius M.[1] Hibbert, M.D., better known as Dr. Hibbert, is Springfield's most prominent and competent doctor, though he sometimes makes no effort to hide or makes light of his high prices. Hibbert is very good-natured, and is known for finding a reason to laugh at nearly every situation, often inappropriately. He and his family live next to Chief Wiggum's house.[2]

Dr. Hibbert is the Simpsons' family doctor, a graduate of Johns Hopkins University School of Medicine and a member of Mensa. He is noticeably less dysfunctional than almost everyone else but he does have a bizarre tendency to chuckle at inappropriate moments. He sometimes gives questionable responses to questions. When Maggie saved Homer from drowning, he replied to Marge's question about how a baby could drag a full-grown man to the shore by saying, "It's very simple. When an adult's life is in danger, a child can summon superhuman strength!"[3] When Homer challenged Red Barclay to eat the Sir Loins-a-Lot steak in a contest, Marge feared that Homer might choke on a part of the steak, while Dr. Hibbert claimed that since being 12% owner of The Slaughterhouse (the restaurant they were eating at), his dietary advice suggests "the occasional eating contest". However, when Red dies from "beef poisoning", he attributes the cause to another restaurant.[4] In addition to working at Springfield General Hospital, Hibbert runs the Dr. Julius Hibbert, M.D. Family Practice, where he showed Lisa a video about DNA.[5] Homer also once took the kids to Hibbert's family practice to get them caught up on their inoculations.[6]

There are hints that Dr. Hibbert is not above dubious medical practices. When Marge talks him out of buying an unsuitable house, he tells her if she ever needs a prescription, "no questions asked..." On another occasion, he buys one of Bart's T-Shirts with the legend "DO NOT RESUSCITATE" remarking that it could get him out of some sticky situations. When he realized that Marge was initially unenthusiastic about having a third child, he implied that a healthy baby could bring in as much as $60,000 on the black market. He then covered for himself against Marge's horrified reaction by saying that if she had replied any other way, she would be sent to prison, claiming that it was "just a test".[7]

Despite his superficially honest and good-hearted personality, there is evidence that he is greedy and obsessed with money. He told Homer that the latter's heart surgery would cost $30,000. When Homer had a heart attack in front of him in response to this news, he says, unmoved, "I'm afraid it's now $40,000".[8] After Homer's baby-proofing business eliminates child injuries in Springfield, Hibbert is seen holding a cooing infant and complaining that there are not any scratches on him, and he has got boat payments.[9] Hibbert is once shown as running an "H.M.O" ("Hibbert's Money-Making Organization").[10] He has been interviewed on television sporting a baseball cap and chain blatantly advertising the wares of pharmaceutical companies.

The "interview" ends with him joining in a choreographed raunchy dance routine with several attractive female dancers promoting Pfizer products.[11] He is a committed Republican and attends Springfield's Republican meetings alongside, among others, Mr. Burns and Rainier Wolfcastle.[12] Hibbert also freely wears fur coats, believing that while fur itself may not be murder, "paying for it sure is!"[13]

While Hibbert is usually competent and responsible, it was once suggested that he did not have a legal license in medicine, since when Lisa was going to say who has been practicing medicine without a license (who is actually Homer), Hibbert tugs his collar nervously.[14] He once tricked Homer into signing a malpractice waiver, after his medication caused Bart to lose his hearing, by making him "test out his signature" on the waiver.[15] It was revealed that the reason a crayon in Homer's brain was never discovered was because the doctor covered up the crayon with his thumb when he reviewed the X-rays.[16] He also once checked Sideshow Bob's pulse before pronouncing him dead; something which would later prove untrue.[17]

His hairstyle has varied over the years (afro, dreadlocks, Mr. T-style Mohawk, etc.), appropriate for the time period. At least one of Hibbert's cars is a green Mercedes-Benz G500,[18] he also had a silver Volvo 850 sedan,[19] and he once mentioned his Porsche keys.[20] He was seen muttering angrily over a "rusty tailgate" on a generic-looking station wagon.[21]

To pay for medical school, he performed as a male stripper under the pseudonym "Malcolm Sex", claiming he would "satisfy the ladies by any means necessary". He has since been seen running an adult education class in "How to Strip for Your Wife", which Homer briefly attended.[22] The Hibberts hosted a key party for swingers where the doctor ended up sleeping with Luann Van Houten.[23] 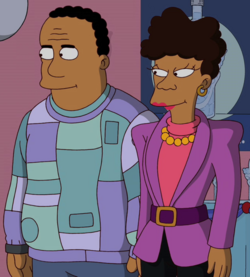 Dr. Hibbert with his wife, Bernice.

Dr. Hibbert is married; he and his rarely seen wife, Bernice, have three children, two boys and a girl. When his entire family is seen together, they appear to be similar to the The Cosby Show. His marriage seems to have some problems according to some moments together, such as being filmed by the "Kiss cam" at the stadium and Hibbert saying they don't like public relations.

It is implied that he and Bleeding Gums Murphy are long-lost brothers; Hibbert says he has a long-lost brother who is a jazz musician, and Murphy says he has a brother who is a doctor that chuckles at inappropriate times, but somehow the oblivious two, even in the same room, fail to put the clues together.[24] Hibbert also bears a striking resemblance to the director of the Shelbyville orphanage, who mentions a personal quest to find his long-lost twin to an indifferent Homer.[25]

He owns a poodle called Rosa Barks who was impregnated by Santa's Little Helper. Unhappy with a litter of Greyhound/poodle puppies, Dr. Hibbert leaves the puppies in the care of the Simpsons. Lisa and Bart distribute the puppies around Springfield. The known recipients of the puppies were Krusty, Snake and Groundskeeper Willie.[26]

Hibbert has inhabited a skull-shape island, where he transforms all of his visitants into animals.[27] Dr. Hibbert once asked Apu to pick up diapers on the street for Apu's octuplets.[28]

Dr. Hibbert does not make an appearance in the game, but he is mentioned in the trivia round. Question: What is the name of the Simpsons' family care physician? A: Dr. Hibbert. {correct answer} B: Dr. Huxtable. C: Dr. J.

This section is transcluded from The Simpsons: Tapped Out characters/Hibbert Family. To edit it, please edit the transcluded page.

Although he wasn't originally based on Bill Cosby's character Dr. Cliff Huxtable from The Cosby Show, when the Fox network moved The Simpsons to Thursdays opposite NBC's top-rated Cosby Show, the staff made Hibbert more of a parody of Huxtable. Hibbert even owns a collection of rather horrid sweaters, just like Dr. Huxtable. Hibbert is always given a new hairdo in flashback appearances, such as an afro, dreads or a Mr. T-like mohawk.

A tongue-in-cheek analysis in the Canadian Medical Association Journal compares the services of Dr. Hibbert and Dr. Nick Riviera, a quack physician often used by the Simpsons as a cheaper alternative source of medical advice. While Dr. Hibbert is praised for his sense of humor and quality of care, it ultimately concludes that Dr. Nick is a better role model for physicians; Dr. Hibbert is a paternalistic and wasteful physician, unlike Dr. Nick, who strives to cut costs and does his best to avoid the coroner.