The Doctor is the titular character of Doctor Who. 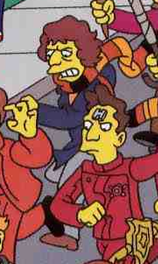 A caricature-like version of him appeared in as a representative of TV.[1]

When Snowball II was the mayor, Lisa cancels out one part of the constitution, subsequently banning all guns. This leads to a British Invasion, having Springfield fall under the British flag and becoming a British city, with every law being replaced by its English equivalent. The Springfieldians then start the New Revolutionary War, to try and chase the British out of town, to which the British retort by throwing hot chips at them. With Springfield's citizens all but ready to surrender, Lisa saves the day by simply politely asking the British to leave. With Springfield reinstated as an American city and with Quimby as its Mayor, the British head back to England. The Doctor was a member of the British invasion.[2]

Comic Book Guy dressed up as a composite Doctor.[3]

The Doctor is element Dc in Lisa's Table of Geeky Delights.[4]

He was sealed in a plastic bag owned by The Collector.[5]