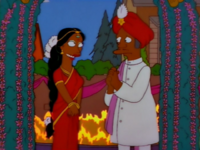 On November 1, 2018, Al Jean shared a link to an article by The Guardian by Indian-American writer Bhaskar Sunkara.[16] The article spoke about the positive aspects of Apu and his influence on people.[17] In the replies to the tweet, Al Jean confirmed that Apu isn't going anywhere.[18] Despite this, in 2020, Hank Azaria stated that while Apu will remain on the show, he will no longer provide the voice for the character.