In the future, Jimbo got married to Sophie. His best man was Nelson, whilst his groomsmen were Kearney, Dolph, and Lewis.[9] 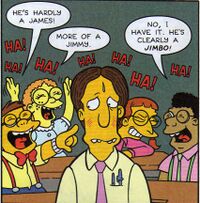 Jimbo is loosely based on the character John Bender from The Breakfast Club. Jimbo is named for the executive producer, James L. Brooks. He is voiced by Pamela Hayden (Tress MacNeille in "The Telltale Head").

In The Simpsons comics, Jimbo comes to school as "James Jones."Although Jimbo is referred to as "Jimbo," that is not actually his real name. Although Nelson once referred to Jimbo as "James," Bart realized that Jimbo's real name is "Corky" in Season 7's "Bart the Fink" (though in Season 8's "Lisa's Date with Density", Nelson refers to Jimbo as "James" when he is defending Lisa, implying that "Corky" could be a nickname or a pseudonym). This may or may not be true. But in the end, it says that Jimbo's real name is "James." Jimbo's other known aliases are Jamesbo, Dr. J and Hector Guterriez (as revealed in Season 18's "24 Minutes", although this episode is considered non-canon).