Growing up, Cletus, developed a loving relationship with his mother, whom he addresses as 'Maw'. He married a close relative, Brandine Spuckler. He has several hobbies which include whittling "piney babies" for children, searching for roadkill, digging through garbage, and spending time with everyone in his family. He admits his favourite food is fresh skunk and raccoon, and had a "smell-hound" named Geech.[1] 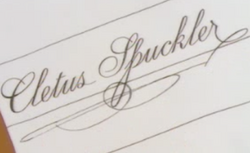 Cletus was introduced during the fifth season in "Bart Gets an Elephant". He is shown as one of the "slack-jawed yokels" gawking at Bart's elephant Stampy. Cletus' voice is slightly deeper in this initial appearance than in later episodes. He, like Captain McCallister before him, was the go-to character for a quick laugh on the show, and is a staff favorite. He was introduced as a character in "22 Short Films About Springfield". The episode featured bluegrass music played on a banjo accompanied with different taglines stating the abnormal things Cletus has done including eating a skunk and losing a toe.