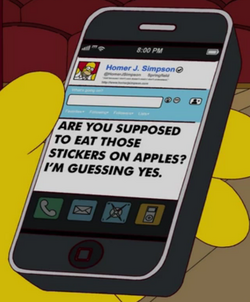 Homer Simpson didn't know what Twitter was and had no desire to find out, but he wanted Bart Simpson to tweet about everything he did.[1] Krusty mentioned Twitter when he was told everyone looked things up on Wikipedia when they didn't understand his references.[2] Jonathan Frink mentioned that Bart tweeted about Homer's bed wetting problems then Krusty re-tweeted it.[3] Homer was shown to have tweeted a joke about stickers on apples.[4] When Elijah Hooper became the new reverend, a church marquee contained a reference to the site. When Homer started to look for a missing Bart at Moe's Tavern, he told Marge to tweet him if he turns up.[5]