Saint Peter (also known as Saint Peter the Apostle) is the gatekeeper or "doorman" of Heaven.

St. Peter appeared in a vision to Father Sean in a flashback, telling a young Sean to change his drunken hooligan ways, inspiring the young Sean to become a Catholic priest.[2] 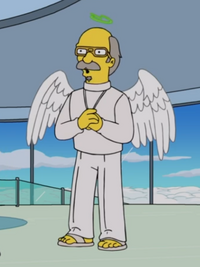 He continually refused Homer's entry into heaven on account of Homer's not having performed a truly good deed at any point in his life. Having given Homer one last chance, he allowed Homer's spirit to return to earth. However, when Homer did finally perform a good deed (saving a baby from death) Saint Peter, who was reading a newspaper at the time, claimed not to have seen it. When Homer exclaimed "Well, I'll be damned", Saint Peter replies "Yes, I'm afraid so, yes" before activating a trap-door that sends Homer ultimately to Hell.[3]

St. Peter was sitting on a couch with God in Heaven discussing with him who they could bring up. He and God listened to three stories and eventually decided to just allow anyone who is good up to Heaven.[4]

After St. Greeter fell to Hell, St. Peter came along and told Homer that God sold Heaven to Google. St. Peter then told Homer that he wasn't supposed to be dead yet and helped Homer to find a new body for him to go to.[5]

St. Peter was one of the first apostles of Jesus Christ, and according to Catholic tradition, was the first Bishop of Rome and therefore the first Pope before being martyred in AD 64 from being crucified upside-down. The reason that popular culture shows him as the "doorman" of Heaven is that in the Gospels, Jesus entrusted Peter with the Keys to Heaven and Earth (keys which are to this day part of the Papal insignia).