Jonathan "John" I.Q. Neidelbaum Frink, Sr. is the father of Professor Frink, with whom he never really got along well. Frink Jr's mother said they got along like positrons and antineutrinos. 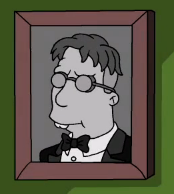 A picture of him hangs in Professor Frink's house.[3]

Jonathan Frink, Sr. and his wife were both chemists who had no love for each other. They had Jonathan Frink together as a test tube baby, making him the second baby born this way. As a child, Frink had to do science and change the pitch of his voice to get his parents to notice him.[2] 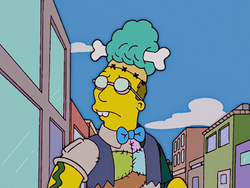 After Frink Jr. won the Nobel Prize (for devising a hammer with a screwdriver on the other end of it), he expressed the wish that his father was able to see him win. He explained that his father always saw him as a disappointment, and described his father as a he-man scientist who worked on the atom bomb by day, slept with Marilyn Monroe by night, and sold secrets to the Russians at lunch. He was last seen alive just before he went to research sharks. Frink Jr. didn't want to go on this trip because he got sea sick a lot, even when taking a shower. His father, disgusted, left without him. Frink revealed that his father was bitten by a shark while testing a blood-based suntan lotion.

Frink brought his dad back to life, explained that his missing organs had been replaced with machines, and that he has no penis "in the traditional sense". Frink Sr., believing he wasn't really alive, went on an organ theft rampage. He took organs and body parts from living people if he thought they were good enough for him, murdering many innocent people in the process. Eventually, Lisa convinced him to get rid of all the stolen organs and go to Stockholm, to see his son win the Nobel Prize, as he was hurting his son by not being there for him. Frink Sr. turned up at the prize ceremony looking back to normal and claimed that he was no longer a marauding ghoul. When Frink Sr. realized that the people in the audience had big, knowledgeable brains, he went on a rampage, taking the brains from people and unlocking more secrets of the universe. Frink Jr. stopped him by kicking him in the crotch, and vowed to bring him back to life again, although Frink Sr. told him that wouldn't end well, with Frink Sr. then seemingly dying. However, Professor Frink revealed he had invented a "soul catcher", which he used to capture his father's soul in a box. Frink Jr. and his father then spoke again, with Frink Jr. throwing some food into the box for him.[1]

A different looking Frink, Sr. was seen when Professor Farnsworth was placed in the retirement home.[4]

Professor Frink, Sr. was a very proud man, being very proud of his family name. He thought of his son as a disgrace due to his seasickness and reluctance to join him on his research expedition. After coming back to life, Frink Sr. became fueled by a lust for organs to improve his body, putting the feelings of anyone else after his lust. However, he was still seen to care deeply for his son, giving up his organs and body parts to make his son happy.