King David was the second king of Israel and Judah.

Ms. Albright passed around a replica of the slingshot that King David used to kill Goliath in her Sunday school class.[1] 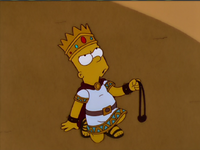 King David appeared in Bart's dream. King David kills Goliath with a slingshot and his son, Goliath II, wants revenge and so he kills King David's oldest friend Methuselah. David then decides that he should kill him, mistaking him for Sampson and chopping off his hair, before being slingshotted away into the mountains and Goliath II declares himself the new king. David tells Shepherd Ralph of his plight: Ralph tries to kill Goliath II but dies trying. David sneaks into Goliath II's tower, which is blown up in the ensuing battle. Goliath II emerges from the flames, ready to strike, when Ralph kills him with his own tombstone ("Ralph! I thought you were dead!" "Nope!"). David is then thrown in jail for megacide, since the people agree that Goliath II was a better king than he ever was.[2]

King David had an attraction on Praiseland. In the attraction reading David his 150 psalms to the children's irritation. [3]

In a dream, King David was seen in Jewish Heaven talking to Joan Rivers.[4]