Methuselah was killed by Goliath II and was King David's oldest friend. 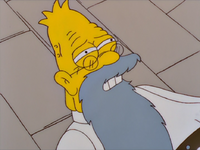 Ned Flanders was hosting a stand giving away free trading cards at the Springfield Swap Meet. The trading cards were of religious figures, including Joseph of Aramathea and Methuselah.[1]