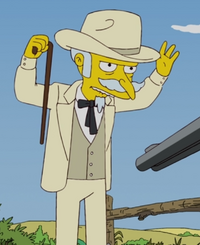 A younger Colonel Burns as a plantation owner

A racist, villainous man, he owned a large plantation in the 1860s and owned a slave named Virgil who is directly related to Homer Simpson and his family. Due to the extremely long lifespans of members of the Burns family, it is quite plausible that around the time of Charles Burns' childhood, Wainwright was the same mysterious figure who lured Charles away from his loving parents to adopt as his own son, intending to corrupt the young boy to be like himself: caring only about greed and power. (Before this time, it seems, young Charles was so lighthearted and pleasant that his parents even gave him the pet-name "Happy.") It has been referenced that Wainwright directly destroyed Charles Montgomery's innocence (it may even have been Wainwright who gave Charles his own middle name "Montgomery" in the first place).

A unkind grandfather of Charles, presumably Wainwright, appeared in Mr. Burns' flashback,[2] portrayed as menacing, powerful and mean-spirited toward the working class. Charles Montgomery Burns refers to "Colonel Burns" as his father; he is presumably referring to his adoptive father, Wainwright, who is actually, by blood, his grandfather.[1]