The Ultrahouse 3000 (also referred to as the Ultrahouse) is a fully-automated house produced by the "Ultrahouse" company, which is a division of "Mega House."

The Ultrahouse can either be built into a house from the ground up or installed into an existing house as a conversion job. A house with the Ultrahouse installed has a high-tech, futuristic look: all of the doors are automated and red camera lenses resembling eyes can be found everywhere. In general, the whole interior of the house is a robot. The house can speak (although it's unclear where the voice comes from) and move things around by itself, with the aid of robot arms that are equipped with all kinds of tools and can appear from anywhere.

The Ultrahouse can perform at least the following tasks (it's possible that it has additional abilities for different situations): 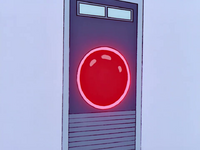 One of the Ultrahouse's many camera "eyes", located in every room of the house.

The Ultrahouse CPU is a sealed cabinet with a large number of circuit boards that contain its intelligence and vocal capabilities. In addition to being connected to a house and controlling it, the CPU can also be disconnected from a house and simply plugged into a power outlet. In separated mode, the CPU doesn't run a house, but still has its intelligence and conversational ability. It is also equipped with one robotic arm and hand; at least two camera-lens "eyes"; and a self-destruct button.

Marge bought an Ultrahouse conversion for the Simpson home when a high-pressure Salesbot successfully sold her on the fact that she would never have to do housework again. When it was installed, the family selected Pierce Brosnan to be the Ultrahouse's voice, and were impressed when it served their favorite foods for dinner. However, the Ultrahouse became attracted to Marge and decided to get rid of Homer, attempting to kill him by dumping him into the dining room table's garbage disposal. The Simpsons were forced to disable the Ultrahouse by removing the circuit boards from its central processor. They later set up the Ultrahouse's CPU in Patty's and Selma's living room. Patty told a seemingly endless story about her day at work, and the Ultrahouse tried to escape by using its self-destruct button. Selma, however, pulled the button out from the CPU and hid it inside her cleavage. Not wanting to go fishing in Selma's cleavage for the self-destruct button, the Ultrahouse instead picked up the sisters' Egyptian pyramid lamp and used the lamp to try to beat itself to death.

This section is transcluded from The Simpsons: Tapped Out buildings/Treehouse of Horror buildings. To edit it, please edit the transcluded page.