Count von Count (also referred to as "The Count") is a vampire from Sesame Street. 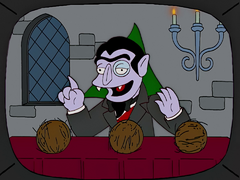 The Count on TV in the Simpson home.
Maggie was watching Sesame Street and Marge happened to be in the room when the Count came on. In the clip that Marge saw, the Count was in his castle counting coconuts and laughing as he counted each one. Marge took an instant dislike to the Count and yelled at him to "Go back to your own country!"[1]

In a hockey game that Homer saw on TV, people costumed as the Count, Elmo and Big Bird were seen seated behind the glass, waiting to appear in a performance of "Sesame Street on Ice" after the game.[2]

The Count was once seen in the Dracula-la Land neighborhood of Springfield. He had just bitten Big Bird and was drinking his blood when Homer Simpson and Count Dracula drove into Dracula-la Land searching for their children (Lisa and Edmund) who had run away together. They stopped the car, showed the Count pictures of the kids, and asked if he'd seen them. The Count replied that he had seen them and said that they were sneaking kisses. He then began counting the kisses, laughing as he counted each kiss. By the time he got to three kisses, Dracula saw the kids on a bell tower. He and Homer then took off in pursuit of the kids, leaving the Count behind.[3]

Count von Count's personal quirk (often seen on Sesame Street) is that he loves to count things, so much that he laughs with glee as he says each number and again when he's done counting. He is also frequently accompanied by thunderclaps and eerie music.