Burns' manor is Mr. Burns' mansion where he resides. It used to host the Springfield Nuclear Power Plant Annual Picnic.

It is located at 1000 Mammon Street, on the corner of Croesus and Mammon streets in the Springfield Heights district. It is protected by a high wall at least 20 feet tall, an electrified fence, and a pack of 10 vicious attack dogs known as "The Hounds" one of which is named Winston. In addition he has at least one 16+ yr old dog named Crippler. Crippler is known for bagging hippies - "something they don't find too groovy at all". At times he has employed for protection a force of Wizard of Oz - style guards, a personal paramilitary force, a riot police squad, and a robotic Richard Simmons. 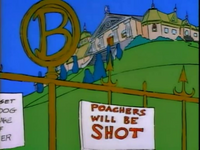 The inside of the mansion includes a room containing a thousand monkeys at a thousand typewriters, a bottomless pit, a human chess board, the largest television in the free world, a 'Hall of Patriots' commemorating his ancestors, a laboratory, a botanical garden of vultures bearing his likeness, a safe containing a Beefeater guard, and a theater showing round-the-clock plays regardless of whether there is an audience, for such a large mansion, it has a surprisingly small basement, seemingly no larger than the basement in the Simpsons home.

The mansion is also home to many rare historical artifacts including the only existing nude photo of Mark Twain, the suit Charlie Chaplin was buried in, King Arthur's mythical sword Excalibur, and a rare first draft of the Constitution with the word "suckers" in it.

He also has a large wine cellar with an entrance through the back of the mansion, the stairway has heads of a Dodo, Saber-toothed Tiger, Tyrannosaurus Rex, all of which are extinct, and a skeleton of a trespasser hung up on the wall. The wine cellar itself has hundreds of wine bottles, including a massive 60,000 dollar bottle of wine which Homer drank.

He also has a room filled with priceless paintings, including The Concert by Vermeer which was stolen in March 1990. It is considered the most valuable painting ever stolen with an estimated value of 200 million dollars. Chief Wiggum and Lou arrested Burns for the burglary and most likely confiscated the painting. Burns Manor has 137 rooms and at least 3 floors visible from the exterior (not including the basement or attic).

The garden used to contain a tennis court but it was later replaced with a giant human chessboard.

In The Simpsons Wrestling, the interior of Burns' manor is an arena.

In The Simpsons: Road Rage, the manor is a drop-off location in the Springfield Mountains level. Passengers asking to be dropped off include Snake, Nelson and Homer. The main hall and Mr. Burns' bedroom can be accessed along with a maze inside the garden. The garden also contains beehives and statues. The garden is the stage where the "Burns' Arena" mission takes place, where Homer knocks down the statues.

In The Simpsons Skateboarding the manor is a playable level. Accessible rooms inside the manor include the dining room, the crypt from "Treehouse of Horror IV", a vault and other rooms. In the garden are a maze and carnivorous Venus flytraps. There is also a greenhouse inside which is a secret laboratory which holds genetically engineered mutants and a ship. Surrounding the garden is a waterfront and missiles.

In The Simpsons: Hit & Run the rooms accessible are the main hall and Mr. Burns' office. The office contains a secret switch on a statue of Burns' head which reveals a model of Springfield with the Sunblocker. The garden is also accessible along with its giant chessboard. Behind the garden is a secret entrance to the Nuclear Power Plant.

This section is transcluded from The Simpsons: Tapped Out mansions. To edit it, please edit the transcluded page.

This section is transcluded from The Simpsons: Tapped Out mansions. To edit it, please edit the transcluded page.