Flanders the Devil (also referred to as "The Devil Flanders") is the Devil in the form of Ned Flanders. 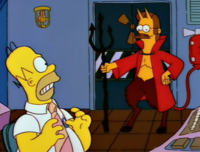 Flanders the Devil appears before Homer.

Homer found that he was out of donuts at work, and even his emergency donut was gone (Homer had already eaten it). Anguished, Homer lamented that he would sell his soul for a donut. As soon as the words were out of Homer's mouth, the Devil appeared in the guise of Ned Flanders. After confirming that Homer really did want to sell his soul for a donut, the Devil produced a contract and a flaming pen. Homer signed, and the Devil gave him the donut (straight from Hell's Kitchen, according to the lettering on the apron of the demon who served it).

Homer devoured most of the donut in seconds, but in a rare moment of clarity, he realized that the Devil would not be able to claim his soul if he didn't finish the donut. Homer started dancing around and mockingly singing "I'm smarter than the Devil!" The Devil transformed from his Flanders guise into a more demonic appearance and roared at Homer, "You are NOT smarter than me! I'll see you in Hell yet!" Then he returned to Hell.

Homer saved the last bite of the donut and put it in the refrigerator, labeling it "Daddy's Soul Donut. Don't eat!" Unfortunately, in the middle of the night, Homer wandered half-asleep to the fridge, found himself unable to resist the "forbidden donut", and ate it. The Devil Flanders immediately reappeared to take possession of Homer's soul. Marge and Lisa pleaded with the Devil and persuaded him to hold a trial the next night, in spite of his complaints about how difficult they were being: "You Americans with your 'due process' and 'fair trials.' This is always so much easier in Mexico." In the meantime, Homer was to spend the next day in Hell, until the trial. 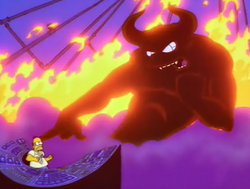 Flanders the Devil is angry.

Homer's punishments during his day in Hell were being chopped into tiny pieces on a conveyor belt, and then being force-fed donuts in the Ironic Punishment Division of Hell Labs. The latter wasn't much of a punishment for Homer—he happily ate thousands of donuts and begged for more, much to the confusion of the demon administering the punishment. At the stroke of midnight, the Devil Flanders brought Homer back to the Simpson home for trial. Unfortunately, Marge had retained Lionel Hutz to defend Homer. Inept as usual, Hutz committed the blunder of allowing the Devil to hand-pick the "Jury of the Damned" in exchange for bathroom breaks.

The Devil Flanders, opening the trial, stated to the jury that he and Homer had a contract—Homer's soul in exchange for a donut "which I delivered! And it was scrump-diddily-umptious!" Hutz, for his part, blundered again, reminding the jury that by definition a contract was unbreakable. When Hutz realized he had no chance to win, he called a bathroom break and ran off by sneaking out the bathroom window.

The judge (the Grim Reaper) was about to deliver a verdict, but in a last-ditch effort, Marge produced a wedding day photo where Homer had written on the back that he pledged his soul to Marge. The jury then ruled that Homer's soul was the property of Marge Simpson and not the Devil, and the judge dismissed the case. Furious, the Devil Flanders conceded the loss, but bestowed a curse on Homer: "Let that ill-gotten donut be forever on your head!"

The next morning at breakfast, Homer had a giant donut for a head. Marge scolded him for picking at it, and Homer was afraid to leave for work because Springfield Police officers with cups of coffee were waiting expectantly for him to come out of the house.[1]

The kids of Springfield went on a vandalism spree and Flanders fashioned the church into a "Heck House" to teach them a lesson. When Ned asked God for the power to scare the kids straight, he was temporarily transformed into the Devil.[2]