When Lisa was the school president, Principal Skinner gave her the key to the study hall. He told her that she would be like Harry Potter "without all the magic and wonder".[1]

Lisa was once reading Harry Potter and a picture of him was on the front of the book.[2]

Harry Potter is seen in the film Harry Potter and the Necklace of Amulets that was shown at Moe's Tavern. Moe and the bar patrons compliment Harry's broom work, but Moe thinks that he shouldn't be playing Quidditch when there are still four of the seven Horcruxes yet to be found.[3]

Mary Sue wrote a fanfiction where Harry Potter said to her that without Mary Sue, they could never have brought Dumbledore back to life.[5] 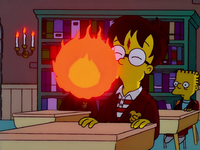 Harry Potter chewing brimstone at Springwart's.
Harry was also one of Bart's and Lisa's classmates at Springwart's School of Magicry. Mrs. Krabappel accused Harry of having gum in class, but he escaped getting into trouble when he told her it was brimstone and blew a bubble to prove it.[8]