King Homer is an ape version of Homer Simpson that is featured in Grampa's retelling of King Kong during a Halloween party at 742 Evergreen Terrace.

King Homer is an obvious parody of King Kong. The King Kong being parodied in the King Homer segment in "Treehouse of Horror III" is most likely the 1933 version due to the black and white scenes. 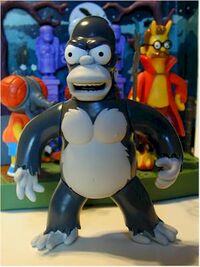 King Homer was created as an action figure for the World of Springfield series.