The Grim Reaper (also called simply Death) is the title given to the person who claims peoples souls when it is their time to die.

In Homer's dream where he was an intermediate skier, Death appeared, who Homer originally thought was Ski Patrol, who was dragging behind him a coffin. When they fell off the edge of the cliff and everyone started screaming, Death realized he couldn't die and opened up a parachute.

Later, Mona Simpson revealed herself to be Death and saved the lives of the Simpson family.[1] 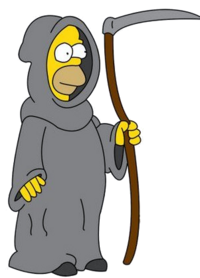 Coming to claim Bart's life, he was then attacked by Homer and after a very silly chase scene was destroyed, which made everyone unable to die. Homer then took his cloak, because it looked comfortable and took up the mantle of Death. Homer temporarily killed all the people God wanted to kill just by touching them with his fleshless arm, and then killed many other people just for fun, but gave up the position after God wanted him to kill Marge. He killed Patty, and put Marge's hair on top of her head, while she was covered by a blanket, to trick God.[2]

The Grim Reaper (along with Santa Claus and a Christmas angel) was once seen being chased away from a Christmas party at Burns' manor by the Hounds.[3]

The Grim Reaper, also known as Death, is known as the personification of death. He is often represented as a skeleton in a black cloak wielding a scythe. According to folklore, Death will appear to mortals when it is time for them to die. In some versions, he is able to make people die by touching them or by means of supernatural powers. There are also some versions were he has no control over people's lives and only serves as a psychopomp to lead the souls of the dead into the afterlife or the underworld.