Peter Griffin is the father of the Griffin family.

Peter was one of the people in the American criminal book along with Stan Smith, both claimed to be plagiarists.[1]

Someone dressed in a Peter costume was at the building of Family Guy World.[2]

When Homer uses the cloning hammock, Peter Griffin is one of his mutated clones.[3]

Peter and his family have their car stolen just outside Springfield. They visit Springfield where the family then makes friends with the Simpsons, until Homer and Peter argue over which beer is best, Duff or Pawtucket Patriot Ale. This ends up in a court case between the two companies and the Pawtucket Brewery in Quahog is forced to close down. Peter and Homer have a huge fight over this which ends with Homer crushed under a Spaceship, but he survives. The two then part on good terms but agree to stay 30 minutes away from each other.[4] 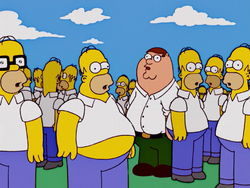