The Salesbot (also referred to as the Gilbot) is a robot who does door-to-door sales for the company that makes the Ultrahouse 3000. He sold an Ultrahouse conversion to Marge. 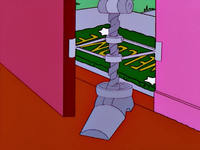 The Salesbot gets a foot in the door.
Marge was at home vacuuming the living room. She heard the doorbell ring, answered the door and found the Salesbot on the front porch. He said, "May I interest you in a housewife's dream?" She tried to close the door on the Salesbot, but he put his leg into the doorway and deployed a brace from his leg, keeping the door from closing so he could continue his pitch: "If you convert your home to an Ultrahouse 3000, you'll never have to do housework again." The Salesbot then handed Marge a flyer promoting the Ultrahouse. Intrigued by the thought of not having to do housework, Marge bought the conversion.

The Salesbot is also known as the "Gilbot" due to its bearing a very strong facial and voice resemblance to Gil Gunderson. (Unlike Gil, however, the Salesbot is actually shown succeeding at making a sale.)