Wiggle Puppy is one of Ralph Wiggum's imaginary friends. Wiggle Puppy flies by spinning his tail.

At the Springfield Knowledgeum, Ralph started to run around in circles as he was playing Wiggle Puppy. He had a drawing of Wiggle Puppy in his room at home.[1]

Clancy Wiggum hallucinated Wiggle Puppy, who acted as his spirit guide, after having eaten a Guatemalan Insanity Pepper.[2]

Wiggle Puppy "helps" citizens in need of it, only to hurt them in a manner worse than what was currently inflicted on them.[3] 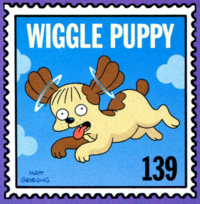 A Bongo Bonus Stamp of Wiggle Puppy was included with Ralph Wiggum Comics #1. This drawing shows the character looking similar to Ralph and gives it color. It also flies by spinning its ears rather than its tail.