Blinky the Three-Eyed Fish (or simply Blinky) is one of many three-eyed orange fish found in the ponds and lakes of Springfield. Its diet consists of worms in heavy water, and plutonium runoff.[1] 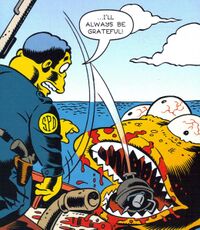 The Blinky species is seen quite often in natural bodies of water in Springfield, and is a product of the nuclear waste of Springfield Nuclear Power Plant. Blinky was caught by Bart at the Old Fishin' Hole and photographer Dave Shutton snapped a picture and put it in The Springfield Shopper. At the same time, Mr. Burns was running for governor, and Blinky became a major topic in his campaign. In a TV ad, Burns defended Blinky, saying he was the next step in the evolutionary ladder and not a horrible mutant, and extolling Blinky as a miracle of nature "with a taste that can't be beat". On the eve of the election, Burns had a comfortable lead over Governor Bailey in the polls. As a publicity stunt intended to secure victory, Mr. Burns had dinner at the Simpson home and Marge served the Blinky fish that Bart had caught earlier. Burns took a bite, found it disgusting and spat it out. Because the meal was being filmed, video of the incident immediately went on the air and Burns ended up losing the election to Governor Bailey, all because of Blinky.[2]

Blinky promotes Springfield's seafood.
The discovery of this fish made a group of people believe that its third eye was a sign of great spiritual wisdom. This belief gave rise to a small sect who kept looking through the nation for a scaly messiah.[1]

Multiple three-eyed fish were blinded by drinking the water in their river after Homer Simpson and several rednecks (including Cletus Spuckler) dumped moonshine into the river to avoid being arrested by the police.[3]

One member of the Blinky species was even further mutated by additional exposure to radioactive waste. The fish became gigantic in size (as big as a large shark), hideous in appearance, and extremely aggressive. It was responsible for a series of attacks in the ocean near Springfield, during which several people were killed. The fish was eventually killed by the chief of police and a local scientist, a. la. Jaws.[8] 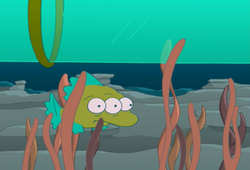 A member of Blinky's "species" has been seen in Futurama, which means that if both shows are in the same universe, the species survives over 1000 years.