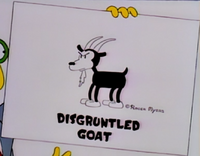 The original drawing of Disgruntled Goat.

A Disgruntled Goat doll (with an updated appearance) was seen being sold in a gift shop at Itchy & Scratchy Land, alongside Uncle Ant and Klu Klux Clam.[1]

During the events of the trial between Chester J. Lampwick and Roger Meyers, Jr. the Blue-haired lawyer, who was working for Meyers, pulled up a number of "original" character drawings signed by Roger Meyers, Sr. Among the characters shown was Disgruntled Goat. He was one of the many characters Roger Meyers, Sr. had stolen, presumably from Chester Lampwick.[2]

This section is transcluded from The Simpsons: Tapped Out decorations/Stalls and carts. To edit it, please edit the transcluded page.