John Adams was the second President of the United States, serving from 1797-1801. He previously served as Vice President from 1789 to 1797 under George Washington. 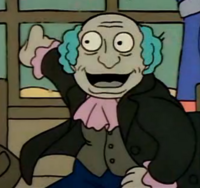 In a fantasy Bart had, he informed everyone that it was snowing. He then said that John Hancock was writing his name in the snow.[1]

A picture of him was seen in a book that Superintendent Chalmers showed Bart, before Bart developed an interest in Theodore Roosevelt.[2]

An animatronic of John Adams was seen in the Hall of Vice Presidents at Kissimmee St. Nick Theme Park and Resort.[3]