Bob Hope was an American comedian.

Armed with a golf club and the mayor's name, he entertained the troops at Fort Springfield with the joke "Hey, this Mayor Quimby, he's some golfer. His ball spends more time underwater than Greg Louganis." Hope introduced Lisa, the then-reigning Little Miss Springfield, to show the soldiers what they would be "fighting for, if there was a war on." However, expecting Miss Springfield, the soldiers stormed the stage, forcing Lisa and Hope to flee on a helicopter. Hope asked to be set down at a boat show.[1]

Homer once said that in showbiz, what goes up, must go down. To counter Homer's argument, Bart and Lisa cited several performers who were consistently popular on a long-term basis, including Bob Hope, Frank Sinatra, Dean Martin and Tom Jones.[2]

Bob Hope was on a United Service Organizations tour, with Cindy Crawford.[3] 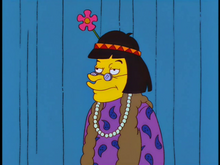 Bob Hope as a hippie in a comedy sketch.
When Homer was trying to educate himself in hippie culture, he watched one of Hope's old comedy sketches. In the sketch, Hope, portraying a hippie, was invited to a love-in and thought he would be attending with Jill St. John, but instead ended up with Phyllis Diller.[4]

Hope died at age 100 and entertained God in Heaven while Maude Flanders was trying to watch Rod down on Earth. God wondered why he had waited so long to bring Hope up to Heaven.[5]

During the song "Sasha is a Massive Success", a picture of Bob Hope was seen on the wall.[6]

When Abraham Simpson was offered his choice of items from a government warehouse, he found a tank he had driven in World War II. Abe recognized the tank because of the mangled golf club stuck in one of the treads: "That's where I ran over Bob Hope. Youngster was too sassy for my likin'!"[7]

Bob Hope was voiced by himself in "Lisa the Beauty Queen", Hank Azaria in "D'oh-in' in the Wind", and Dave Thomas in "Bart Has Two Mommies".