Hermann Göring was a leading member of the Nazi Party. 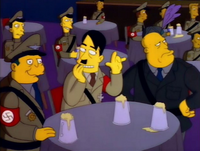 Göring (left) with Hitler and Mussolini

In a story told by Abraham Simpson, Göring was with Hitler and Benito Mussolini watching Abraham when he was posing as a German cabaret singer.[1]

Abraham Simpson got a priceless watch from Hermann Göring because Abe let him live during the World War II. Göring then managed to escape to Argentina and took up the name Señor Hermann Gomez.[2]