Spiro Agnew was the Vice President of the United States under President Richard Nixon. He served from 1969 to 1973, when he resigned due to a scandal and was replaced by Gerald Ford. 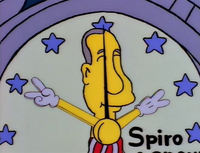 Spiro Agnew on a clock

A clock with Spiro Agnew on was used in a bomb to destroy Mr. Burns' lab. Mona Simpson was one of the people who set the bomb.[1]

When Homer was young and found a lamp with a mean genie inside, he asked his dad if he could wish to become the world's yo-yo champion. Abe told his son that it wasn't a good idea because he might do a performance for President Nixon and accidentally kill him, which would result in Spiro Agnew becoming President. Homer then started imagining that very thing happening.[2]

Mr. Smithers listed Agnew as one of the Great Toadies in History for being "Nixon's chief fall guy".[3]

An animatronic of Spiro Agnew was seen in the Hall of Vice Presidents at Kissimmee St. Nick Theme Park and Resort.[4]