Benjamin Franklin was one of the Founding Fathers of the United States and an inventor.

Benjamin Franklin appeared in Bart's fantasy about the snow day. He rushed into Congress announcing that he had invented the sled. He and Congress then ran outside for a snow day.[1]

When Lisa tried to writes a essay she started to think what would Ben Franklin say if he were alive today.[5]

Bart gave a report on Franklin where his version of the kite experiment had Franklin deliberately getting the kite with the key stuck in a tree. When lightning struck the key, and in turn the tree, Franklin triumphantly cried, "Kite-eating tree, I'll see you in hell!!!", referencing Charlie Brown's recurring battles with the kite-eating tree in Peanuts.[6]

An animatronic Benjamin Franklin was seen in "The Alco-Hall of Fame" display at the Duff Days festival. He started to say "Early to bed, early to rise-" before he was cut off by Babe Ruth who asked Franklin "you think you're better than me?".[3]

Stephen King once said that Franklin was said too have tortured small animals and green mountain men and that the kite he tied to a tree opened the gates of hell.[7]

Benjamin Franklin, alongside George Washington and Andrew Jackson, appears on a one hundred dollar bill and convinces Homer to spend the money that Marge had been saving as a "nest egg".[4]

Franklin is also one of the many people on "Ned's List of Laudable Lefties".[8] 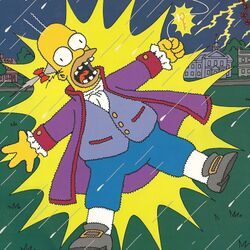 When the Simpson family goes to visit God to ask for the destruction of Springfield by aliens to stop, he is a boss that guards God's gate. He is seen walking out of a Starbucks and calls Lisa a bigger buttkisser than Thomas Jefferson. Shortly afterwards he is among the enemies sent by God.[9]