Wolfgang Amadeus Mozart was an Austrian composer in the 18th century.

The ghosts of Mozart and Beethoven

Mozart appeared in a story told by Marge. Mozart was announced onto the stage by his father. Mozart then proceeded to play the piano in a showman way. After the show, his sister, Sally Salieri, was jealous because she wanted to headline a show too. Mozart pulled pranks on Salieri and teased her whilst writing music himself. At the Vienna Concert Hall, Mozart won an award for outstanding composer. Later, Mozart played an opera at the Vienna Opera House. During the show, Sally Salieri gave Emperor Joseph II wine spiked with a sleeping potion. When the Emperor started to fall asleep, the audience all acted bored of the opera too.

After this disaster, Mozart became depressed and then sick. In bed, Sally Salieri brought Mozart a doctor, who then covered him in leeches. Mozart was dying and Salieri told Mozart she didn't want him to die, just wanted to destroy his career. Mozart then told her that he thought Salieri's music would be judged better in history, however, since he was dying young, he would be cool forever. As Mozart died, he told Salieri to "eat my pantaloons".[1] 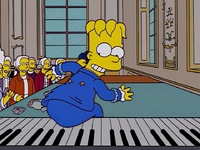 Mozart plays the piano with his butt

When Homer met a look-alike of James Madison he at first mixed him up with Mozart.[2]

Clancy Wiggum mentioned to Marge that all Sarah listened to whilst she was pregnant with Ralph was Mozart and Churchill speeches.[3]

Mozart was featured on "Ned's List of Laudable Lefties".[4]

When Bart Simpson is playing piano, the ghosts of Mozart and Beethoven appear.[5]

Homer did not want take down Everscream Terror after Lisa was afraid because he call himself Mozart of Halloween decorations, and tonight is the Super Bowl.[6]

Victor Kleskow asked Lisa if she thought Mozart ever apologized. He then said that he wasn't there, and if he was he'd be pushing a plow because not everyone got to hang with Mozart.[7]

This section is transcluded from The Simpsons: Tapped Out characters/More Kids. To edit it, please edit the transcluded page.