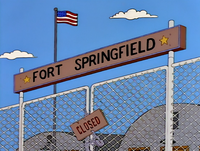 Fort Springfield, after the government shut it down

When Principal Skinner was a sergeant for the US Army, he worked for Fort Springfield.[1]

The government once closed Fort Springfield, which devastated the city's liquor and prostitution industries. This, in turn, lead the entire city into an economic slump, with record unemployment rates. It was because of this, that the city decided to legalize gambling, to help recover from the slump.[2]

Part of the fort has been preserved as a historical site, which Springfield Elementary School went on a field trip to.[3]