Frederick Charles "Freddy" Krueger is a character from the A Nightmare on Elm Street franchise.

A look-a-like of him singing the "Springfield Blows" song.[1] 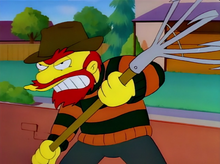 After Marge locks Homer in the cellar he is unwillingly released by Moe, along with a band of demons including Jason Voorhees, Count Dracula, the Mummy, the Wolfman, and Pinhead, despite wanting to finish eating before killing his family.[2]