Dr. Vladmir Krabokov before he was Dr. Crab

Dr. Vladmir Krabokov tasked two thugs with setting off a mega-bomb and stealing the test data from Blather Labs. This was the event that turned Claude Kane III into Radioactive Man.[1]

Dr. Crab had his new assistant, Nickolai, infiltrate Blather Labs and steal the Foreverlution Formula. Dr. Crab then used this formula to bring back dinosaurs, mixed with the DNA of his own family members. Radioactive Man found him on his island and defeated Dr. Crab, leading to the destruction of his island base.[3]

Due to his urge to defeat Radioactive Man, Dr. Vladmir Krabokov did nuclear research, which mutated him into Dr. Crab.[4] 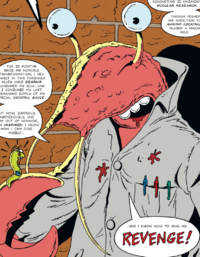 Later, Dr. Crab attacked the Mando Building with his Crab-Bots. However, Radioactive Man came back from the dead and stopped him.[6]

He was the main villain in the Superheroes event. He encased Radioactive Man inside of the Radioactive Man Statue, but he broke out. He returns in the sequel, Superheroes 2 event, trying to transform all Springfielders into crabs. After failing he unleashes Pinchy in town to seek revenge for the previous year's defeat. However he is defeated again, with Pinchy dead once again, he joins the town as a permanent resident.

This section is transcluded from The Simpsons: Tapped Out characters/Super Villains. To edit it, please edit the transcluded page.