Otto Octavius, better known as Doctor Octopus is a Marvel super villain and an enemy of Spider-Man. 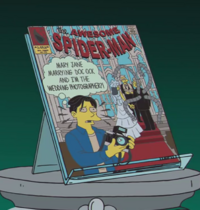 The comic with Doctor Octopus on

At Nelson's birthday party played him and Bart with an actor that played Dr. Octopus.[1]

When Lisa finds Dr. Nick in the cemetery, he puts four severed arms around his body and says: "I'm not Dr. Nick, I am Dr. Octopus!".[2]

He appeared on the cover of The Awesome Spider-Man and was getting married to Mary Jane Watson. Peter Parker was the photographer of the wedding.[3]

Comic Book Guy and another man dressed as Doctor Octopus for Comicalooza.[4]

Though depicted with blond hair in "Married to the Blob", in the comics Doctor Octopus has brown hair.