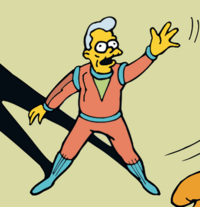 In 1995, Claude Kane III had retired from being Radioactive Man as Rod Runtledge had taken up the mantle. He also had his lightning bolt removed from his head. After Rod got knocked out by a space alien's robot, an elderly Claude woke him up and told him to save Gloria.[6] 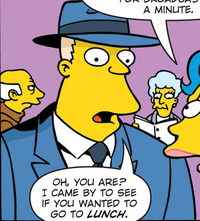 Claude Kane III had a crush on reporter Gloria Grand and kept asking her out, only to be rejected. His father also considered his son a disappointment who didn't do anything of note.[7]

Claude can come across as very gullible. He believed the rantings of J.J. Bellwether and Hedrick Hertzmann who were saying that William G. Maimes was a soviet spy, and even backed them up with "evidence".[3] He is also not very smart at times, not knowing a thing about radiation, despite it being the source of his powers.[8]