The space alien is an alien who fought against Radioactive Man and Fallout Boy. 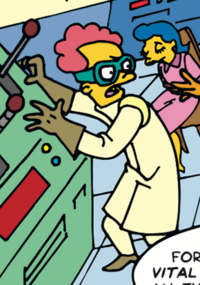 When Gloria Grand found out a spaceship had landed in Zenith City, she went to investigate. At the scene, the space alien was fighting against Radioactive Man and Fallout Boy. As he was getting beaten up, Gloria went on board the spaceship and accidentally set it traveling through time to the future. After the fight, the space alien went to go back to his spaceship but found that it was missing. He figured out that Gloria has taken the spaceship and knew it would end up in 1995, so he waited around for four decades, using a mask of a human face to blend in.