Parker Peterman is a student at Zenith High School with super powers. 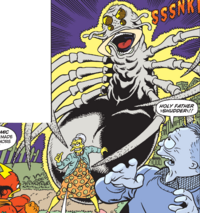 At school, Radioactive Man went to give a speech about radiation to the students. When showing off his powers, he irradiated a spider which bit Parker Peterman, making him feel sick. He attacked the school jock, Buck Curtis, claiming that Buck bullies him before he ran off home. At home, he refused to talk to his aunt and uncle before he mutated into a giant radioactive spider and destroyed the house. Radioactive Man arrived to stop him but ended up getting knocked aside. He then used his radiation vision on Parker which caused him to grow bigger.

Parker rampaged towards Zenith High School whilst the military mobilized to stop him. Radioactive Man convinced the general to let him deal with Parker. Parker attacked Buck and Buck's girlfriend, Liza, so Radioactive Man saved them. Parker then got Radioactive Man stuck in a web. Realizing he only had one option, Radioactive Man turned himself into a nuclear reactor, absorbing all the radiation from Parker, turning him back to normal.

At Zenith Hospital, Parker was back to looking like he was before. However, he was standing on the ceiling, showing he had some of his powers left. Radioactive Man told Parker that he was too neurotic to be successful as a superhero.

Parker Peterman is a straight-A student. However, he's held back by his feeling self-conscious. He feels like everyone is against him because everyone else is more attractive, stronger and more popular than he is. These feelings make him lash out at people being nice to him, thinking that they are attacking him. Parker also seems to have some issues with anger, getting angry at people very easily.

Parker's intelligence causes him to question how he got powers, claiming that the radiation should have killed him and Radioactive Man.

Parker Peterman is a parody of Peter Parker, AKA Spider-Man.