Hawkeye Pierce (given name Benjamin Franklin Pierce) is a surgeon on M*A*S*H.

Lisa got eardrops at Dr. Hibbert's office and had to wait 20 minutes for them to sink in. Hibbert offered her a M*A*S*H coloring book (with Hawkeye and his bunkmate B.J. Hunnicutt on the cover) in case she got bored. As he handed her the book, he glanced at the pictures and chuckled at one of them as he read the caption aloud: "Hawkeye's antics irritate the other surgeons."

Hawkeye Pierce was the central protagonist of the M*A*S*H TV series and was one of the few characters to appear for the entire run of the show. His trademark was using humor to cope with the stress of front-line surgery. He was portrayed by Donald Sutherland in the film and Alan Alda in the TV series. 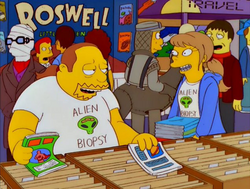 She isn't given a name, but should we give her an article?

This article is about the real-life entertainment franchise. For the film as seen in the Simpsons universe, see Back to the Future..

This article is about the first issue of Bart Simpson Comics. For the comic compilation, see Bart Simpson: Son of Homer.

The Penalizer was Principal Seymour Skinner's supervillain alter-ego. He went on a brief spree in Springfield until he was stopped by Bartman.

The Penalizer's costume was a green coverall with a puma logo on the chest. The Penalizer's face was covered by a brown hood equipped with eyeholes and held in place by a grey cord. The costume's gloves and boots were also brown, and the costume had utility pouches at the waist, wrists and boot tops.[1] [2]

The Penalizer's motive was to ensure that people who committed crimes that went against society's norms received what he felt were appropriate punishments. Equipped with a pair of night-vision binoculars, he patrolled the streets of Springfield at night looking for offenders. After catching them in the act, he confronted the offenders, orchestrating his reveal for frightful effect. He then made them inflict ironic punishments on themselves by using a rare working Hypno-Coin.[2]

The Penalizer's origin is rooted in post-traumatic stress from Seymour Skinner's wartime Army service in Vietnam.[1] The experience of intense combat situations, plus having been a prisoner of war, [3] [4] left him prone to flashbacks. [5] After becoming principal of Springfield Elementary School, Skinner developed a penchant for rules and details, which intensified during tense situations and resulted in him treating students as though they were soldiers under his command. [4] [2]

It is unknown what specific event led to Skinner's becoming The Penalizer. However, it is known that The Penalizer's spree began sometime after the Hypno-Coin was used to make the teachers think they were chickens. Martin Prince, Jr. later found the coin on the playground and turned it in to Principal Skinner, who stored it in his office safe with other items he had confiscated. Evidently, at some point after that, Skinner stole the Hypno-Coin from his safe and embarked on his supervillain career as The Penalizer.[2]

The Penalizer ran up a large enough count of victims that Springfield General Hospital was forced to re-open its previously closed west wing in order to treat the influx of hypnotically traumatized patients. Bartman began investigating, going on nightly patrols in search of The Penalizer, but with no results until he found Nelson Muntz. From that point, The Penalizer's victims were as follows:[2]

The Penalizer is a parody of the Marvel Comics character Punisher.