Spock is a Starfleet officer in Star Trek.

When Leonard Nimoy was buying a hot dog, the vendor asked what he wanted on his hot dog, calling him Spock. Nimoy told him to surprise him.[1]

When Comic Book Guy hallucinated that he was Spock and saved James T. Kirk's life, he told Uhura that he wanted to make out with her, as he also does with Catwoman and Agent 99.[2]

Comic Book Guy has bought I Am Not Spock, I Am Spock, and I Am Also Scotty by Leonard Nimoy.[3]

In the montage of kisses when Nikki did CPR on Bart, one was between Spock and Uhura.[4]

He appeared in the Christmas movie Jingle Bell Spock.[5] 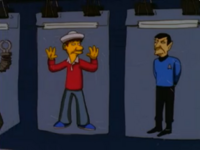 One of the celebrities The Collector had captured was Leonard Nimoy as Spock.[7]

When Comic Book Guy does his "Cosplay" task, he dresses up as Spock and runs around with a phaser.[9]