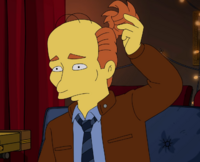 When Bart became the "I Didn't Do It" boy, he appeared on Late Night with Conan O'Brien, though didn't appear to enjoy the experience.[1]

A picture of Conan O'Brien is on the wall at The Pimento Grove.[2]

When Snake promoted his book, The Ten Habits of Highly Successful Criminals, he said he will be on Conan Thursday with Heather Locklear and Third Eye Blind.[3]

He appeared in the crowd of a Boston Americans parade.[4]

A picture of Conan O'Brien was seen on the wall of Springfield Sardi's.[5]

Homer Simpson interviewed Conan for his exit interview. At first, Homer mistook Conan as one of the Impractical Jokers. Homer then went on to conduct the interview. After the interview, Conan revealed to Homer that he was wearing a wig and that his hair was actually like Homer's.[6]