James L. Brooks is an American producer, director and screenwriter.

Ned Flanders once fantasized about the horrors of Hollywood and saw him. James offered Ned a sponge cake with brandy icing, to which Ned screamed "No!". Brooks also asked if Ned liked football, then laughed as he told Ned that Los Angeles had no team.[1]

James L. Brooks was seen eating at the restaurant Morton's. He was seen seated with Steven Spielberg, Eddie Murphy and Krusty the Clown.[2] 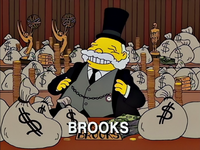 James L. Brooks is an executive producer and developer of The Simpsons.