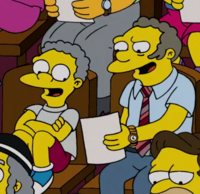 Morty in his younger days

Moe's father used to get drunk with Frankie's father and make the kids fight each other.[1]

Moe said that his dad was a circus freak, but his mother didn't remember which one.[2]

When Moe was younger, he worked for his father, with his brother and sister for his mattress store chain, Mattress King. The way he got rid of the competition was to release bed bugs into competing stores. When Moe was old enough, Morty told Moe to release bed bugs in Sleep 'N Snooze, which was run by another family. When Moe realized it was run by a family, he didn't do it and Morty disowned him, kicked him out the house and turned Moe's bedroom into a gym which he never used.

When Morty was retiring from being a mattress salesman, he called Moe to speak to him again and tell him this. After initially fighting, Marge convinced Moe to give his family another chance. Moe did and his father gave him one of his three remaining mattress stores. After Moe's brother and sister started to try to undermine Moe's store, Marge went to Morty again to tell him and Morty went to intervene. They found Moe in the Mattress King Warehouse, about to release bed bugs all over Marv and Minnie's mattresses. When Marge asked Morty to talk him out of it, Morty instead encouraged Moe to do it as that was what he wanted all along. Moe, however, couldn't go through it. When Marge congratulated Moe on being a good person, he dropped the jar of bed bugs and everyone ran from the warehouse.[4]

Morty was in a sauna with Krusty the Clown[5] and he was seen in the audience for Tabitha Shingle's live recording of her podcast Interminable.[6]

This section is transcluded from The Simpsons: Tapped Out characters/Szyslaks. To edit it, please edit the transcluded page.