Bigfoot (also referred to as "Sasquatch") is a supposed large apelike creature that has big feet and lives in forests.

Bigfoot is human-like, but generally larger than a human and covered with hair. The most common evidence of the creature is its large footprints (whence it derives its name). 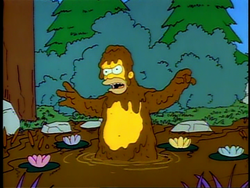 After losing his clothes on a family camping trip and falling in mud, Homer was mistaken for Bigfoot and captured by scientists who observed him to determine what species he was. He was speculated to either be a brilliant ape or a dumb human.[1]

While recording an upcoming FOX TV special In Search of Bigfoot, an actor named Bob was dressed as Bigfoot. They were filming but stopped after they saw Bob's wristwatch in the frame. Shortly after they filmed Barney Gumble causing an avalanche onto himself.[2]

The tabloid TV show Rock Bottom once aired a story about Sasquatch which Homer considered to be "fair and even-handed".[3]

Bigfoot was seen getting off of a bus in Toronto, Canada.[4]

Groundskeeper Willie had for years hunted Bigfoot, so he could make a coat from hair he had stolen from people to dress himself as a new friend for Bigfoot. When Willie realized at they had defeated him he quit, as long as he retained his new coat, but it turned out that someone stolen it. Later in the forest, Bigfoot wore the coat and came home to his wife. He told her that he found it and she asked him to find her one. Bigfoot asked what is for dinner, but his wife walked away and told him to make it himself.[5]